WESTconsin Credit Union made a game changing decision by choosing to enter into the hotly contested city of Eau Claire, Wisconsin.

With numerous regional and national competitors already entrenched in the marketplace, WESTconsin Credit Union turned to La Macchia Group to propel it into the mix of competition. From initial market selection, La Macchia Group provided the insight and metrics necessary to allow the Credit Union to act on which market to expand into to best serve its growth goals.

After Eau Claire was chosen, La Macchia Group then assisted WESTconsin in identifying a very prominent site opportunity before it became publicly available. After intense negotiations and complicated due diligence activities, which were primarily related to existing environmental conditions of this former car lot, the Credit Union was able to close and immediately commence construction. Through a concerted team effort, WESTconsin and La Macchia Group transformed this well-known former car dealership into an attractive flagship deployment that expressed the kind of retail excitement one would expect of such a highly visible and accessible location.

With a coordinated public announcement of the project upon closing, thus giving enormous excitement in the community, construction then began. WESTconsin Credit Union then opened this new 12,000-square-foot branch offering convenient service to residents of Eau Claire and surrounding communities. The building is situated on the site to take advantage of solar light gain without letting in direct sunlight, which can adversely affect HVAC efficiencies. The net effect of this is both an increase in the "curb appeal" of the site as well as the environmental sustainability by using less electricity to light the interior.

WESTconsin Credit Union's partnership with La Macchia Group has yielded a highly attractive, visible and sustainable branch which will continue to add to the Credit Union's success in the marketplace.

The branch needed to resonate with a varied age population; therefore ultimately an outdoor camping experience inspired the design of the lobby. A living wall made of recessed potted plants placed vertically in the entry wall welcomes members with a breath of fresh air and pays homage to the roots of the Credit Union’s history serving the agricultural community. The lobby waiting area is anchored by circular seating nestled around a unique light fixture representing stars in a clear night’s sky. Vinyl wall coverings with patterns reminiscent of trees and bark encompass the walls. Other one-of-a-kind features incorporated to mimic a warm and cozy outdoor environment were glass tiles inset on the face of the teller pods to replicate a campfire and overhead latticework above cabinetry evoke a sense of shelter.

View of the full lobby and lounge area 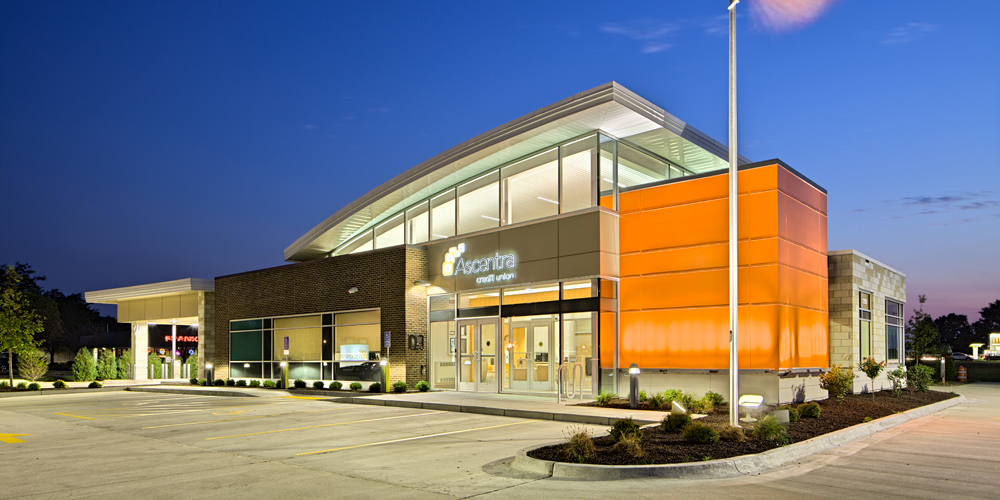