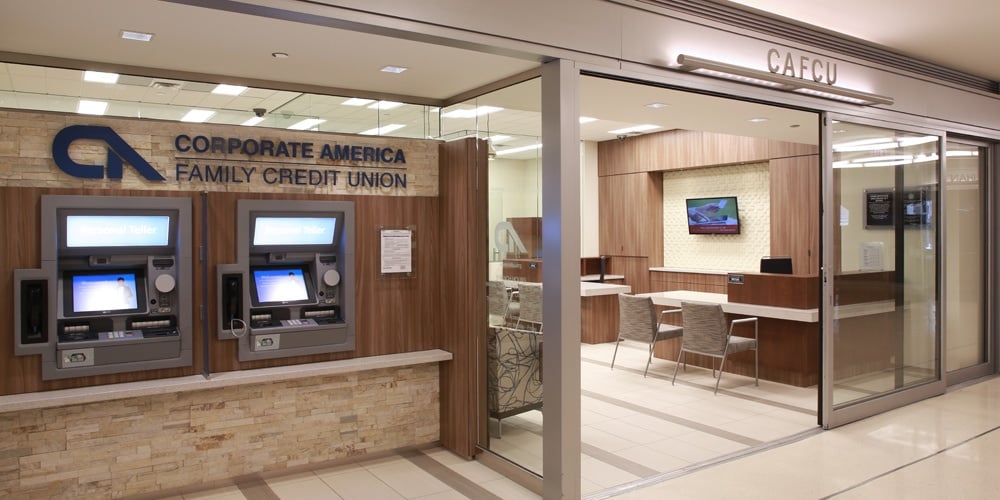 With a new brand image and growing downtown member base, Corporate America Family Credit Union selected La Macchia Group as its partner in the design and construction of its new micro branch location at 233 E. Upper Wacker Drive in Chicago, Illinois.  A suite within The Illinois Center  was selected by CAFCU for its great location. The goal was to find a high visibility space that reflected CAFCU’s new look and provided maximum visibility for their downtown member base. Situated on the ground floor, the space provides visibility to over 45,000 people who walk past daily and is accessible by multiple alternate forms of transportation within the city, including Chicago’s bus and light rail lines, as well as easy access for drivers and pedestrians. La Macchia Group assisted the Credit Union with its lease by providing detailed 3D renderings of the proposed space; these were used to more specifically outline the scope of work as it related to the build-out.

The design response for the branch was based on providing maximum open space within the 900 square foot branch. Glass and generous lighting was employed throughout the branch to provide a sense of openness and scale. In order to maximize the amount of space dedicated to the lobby, detailed millwork was designed to conceal required branch items such as copiers, training stations, general storage, etc. With over 45,000 people walking by the branch on a daily basis, La Macchia maximized the branch’s retail impact  with bold signage and elevated finishes as the main focal point of the lobby to reflect the new corporate identity of the Credit Union to passers-by.

New Solutions for a Service-Driven World

Creating an efficiently sized branch in such a highly trafficked urban location presented an unusual challenge, as the small size limited the amount of staff available to service members during peak business hours. To address this, CAFCU and La   Macchia Group implemented Personal Teller Machines (PTMs) outside of the branch instead of the traditional ATMs used by most financial institutions. Not only has this allowed CAFCU to expand real-time availability of its services to members during non-traditional hours, but it has also made it possible for the branch to maintain a high level of member service and member satisfaction during peak business hours.

All La Macchia representatives with whom we dealt were both responsive and supportive to the utmost. Not only did they help us envision a sleek, contemporary design for our newest branch, but they helped with the implementation every step of the way. They took the time to understand who we are and aligned the new branch with our refreshed brand and new technology – Personal Teller Machines (PTMs) – truly enhancing our members’ experience. 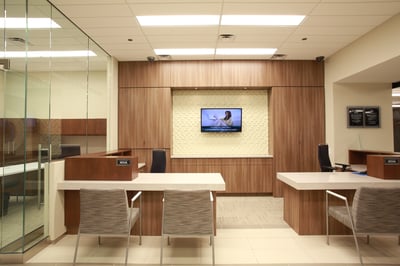 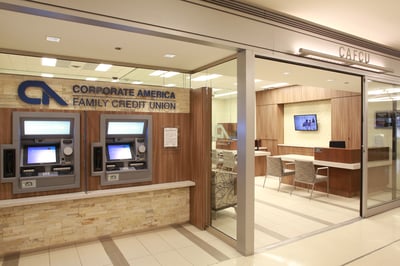