STURGIS, SOUTH DAKOTA - June 15, 2016 commemorated the grand opening of Black Hills Federal Credit Union's (BHFCU) new branch located in Sturgis, South Dakota. Many people from the community including members, staff, and members of the Board of Directors at BHFCU joined in celebrating this event. Key representatives from the city of Sturgis were also there celebrating the opening of the new branch.

Black Hills Federal Credit Union selected La Macchia Group as its partner for its branch expansion project into the Sturgis market. An important cornerstone to their successful deployment was to create and implement a reinvigorated branded identity that included BHFCU's new logo. La Macchia Group therefore executed thsi new branded look and feel throughout both the interior and exterior of the branch. The new Sturgis branch reflects BHFCU's continued commitment to providing the best products and services to its members for 75 years. 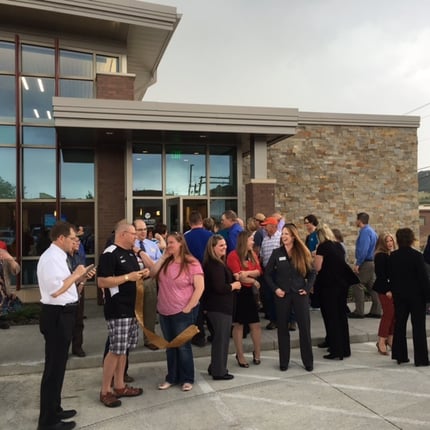 MILWAUKEE, WISCONSIN - With a sole focus of providing financial institutions with market-driven,...

Milwaukee, WI –  Summer is one of the busiest times in the design-build industry. Why is that?...

MUSKEGO, WISCONSIN - June 21, 2017 was a day of celebration for Landmark Credit Union as they broke...